Type a keyword or phrase below

The two panel discussion will provide first-hand insight and knowledge on the following topics:


A Stakeholders’ Roundtable on Sports Business and Dispute Resolution will be held on Tuesday, 19th March 2019. This roundtable is a collaborative effort between Lagos Chamber of Commerce International Arbitration Centre and the following organisations: the Lagos State Sports Commission, Akinwunmi and Busari, Andi Daze Legal, SuperSport, 7Up Bottling Company Plc, Aiteo and Connect Marketing.

Highlights of the discussion will include:
• Enlightening stakeholders on key sporting principles
• In-dept review of various international sports dispute resolution structures
• Review of global best practice for resolving disputes arising from business transactions
related to sponsorship, merchandising, broadcasting and media deals
• Direction on the future of sports industry dispute resolution in Nigeria
• Proposals for internal legal framework for sports associations
• Provision of sample dispute resolution clauses for contracts and bye-laws; and
• Solicit firm commitment from stakeholders towards implementation of the clauses

The Lagos Chamber of Commerce International Arbitration Centre (LACIAC) brings you the first edition of its Newsletter, Dispute Resolution Update. In this edition, we review events in Nigeria since the last quarter of 2016 which will impact commercial and investment dispute resolution, including:

Here is an overview of the Roundtable Discussion held by the Lagos Chamber Of Commerce International Arbitration Centre (LACIAC) in conjunction with Perchstone & Graeys and Yusuf Ali & Co on Channels TV. 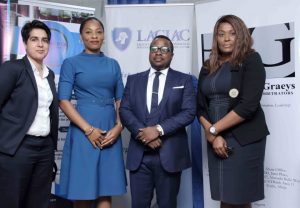 Investors harped on the need for Nigeria to remove bottlenecks to capital access while urging reforms that would ensure that business owners get justice within the shortest possible time.

The Arbitration and Conciliation Act (Repeal and Re-enactment) Bill (The Bill) has successfully passed through the Senate and awaits the concurrence of the House of Representatives and the assent of the Presidential to become law. The purpose of this reform is to modernize Nigeria’s arbitration law and tackle problems that have been a disincentive to arbitrating in Nigeria.

Under the present framework, guerrilla tactics have usually been employed in arbitral proceedings, often in the form of incessant “interlocutory appeals” to court complaining of arbitrator “misconduct” and often accompanied by injunctions to restrain arbitral proceedings. The Bill has removed the concept of “misconduct” and aligned the grounds on which awards may be challenged with the more limited “due process” and “jurisdictional” grounds contained in the UNCITRAL Model Law and the New Your Convention.

When an arbitration proceeding eventually comes to a conclusion, enforcement can be quite problematic if the losing party decides to challenge the arbitral award. Under the present framework, the scope for courts to review arbitral awards is very wide and is, in effect, almost comparable to the full merits review that applies to first instance court decisions. The Bill recently passed by the Nigerian Senate has taken a bold step to address this issue by considerably reducing the wide scope for judicial review that currently exists and, in its place, providing for an appellate level arbitral process that will review the award of first instance arbitral tribunals.

Another innovative provision in the Bill is the expansion of the definition of ‘Costs of Arbitration’ to now include the arbitral institution’s cost and the cost of third party funding. While the effect of the inclusion of the cost of the arbitral institution in calculating the cost of the arbitration will probably not be significant  because most institutions already have their cost included in their Rules which the tribunal and the parties are obligated to comply with, the opposite is the case for the provision relating to third party funding.

Nigeria currently does not have legislation that expressly prohibits third party funding. However the common law doctrine of champerty and maintenance apply in Nigeria as part of received English Law. This raises significant doubt about the enforceability of third-party funding agreements. The express reference to the use of third party funding signals legislative acceptance of this mechanism which most business managers will find a useful strategy for keeping litigation costs off their balance sheet.

The Nigerian arbitration community eagerly awaits the enactment of what promises to be a major development in the evolution of commercial disputes resolution in Nigeria.

The Bill is expected to pass through the House of Representatives and obtain presidential approval before it becomes law.

The proposed legislation will introduce significant reform in the practice of arbitration in Nigeria, and make Nigeria an attractive center for international and domestic arbitrations. The Bill contains innovative provisions on:

Under this new structure, the NPAMC (now referred to as “the management company”) will have the responsibility for the management of assets held by NNPC under the Production Sharing Contract and the Back-in Rights Provisions. The NPC would operate as a profit-driven commercial entity, which will be run like a private company and will be responsible for management of all other assets.

The unbundling of NNPC may cause some concern to foreign partners and oil companies and questions may arise as to the legal consequence of previous agreements. The new Bill provides for the transfer of assets and liability, which would be “fully effective and enforceable against or in favour of the Management Company as if, instead of NNPC, the Management Company had been named herein”.

The lawmakers believe that the passage of the bill will open up the sector to better business opportunities, while ensuring transparency, accountability of revenue derived from oil and will help steer Nigeria out of recession.

On the 3rd of December 2016, Nigeria and the Kingdom of Morocco signed a Bilateral Investment Treaty (BIT) with the aim to improve bilateral trade relations and strengthen their business relationship.

The Nigeria/Morocco BIT is an ambitious update on traditional treaties and a significant attempt by two developing countries to move toward a more balanced regime of intra-African investor protection. Some of the significant provisions are:

This provision ensures substantive protection of investors by the host state usually contained in traditional treaties. It further states that investors are not only entitled to the minimum standard of treatment, but also to fair and equitable treatment, which includes full protection and security.

Investors’ Obligations to the Host State

Another term of the treaty is the reciprocity of the relationship between the Investor and the Host State. Unlike, the traditional treaties, the Nigeria/Morocco BIT imposes a number of obligations on the investors. According to Article 14, investors must satisfy environmental and social impact assessment requirements based on standards agreed by the Joint Committee. Investors must also comply with international labour standards, uphold human rights and operate through high levels of socially responsible practices. Article 20 encourages investment, but not at the expense of environmental and social well-being of the host state; an investor in breach of this provision will be subject to civil liability in their home state, in the event that acts or decisions lead to significant damage or loss of life in the host state.

In most traditional treaty agreements, there is provision for the amicable settlement of disputes between an Investor and the Host State. Article 26(1) of the Nigeria/Morocco BIT takes things a step further by requiring that prior to the commencement of treaty based arbitration, the dispute must be assessed through consultations and negotiations by the Joint Committee, after which the Committee has 90 days to submit relevant information about the presented case. This requirement applies to both Investor-State and State parties disputes.

Nigeria’s Arbitration Act[1], was enacted in 1988 and is now being reviewed to bring it up to date with international best practices in arbitration and alternative dispute resolution. Since it was enacted 29 years ago, there have been several important legal developments in arbitration.

This year, the Nigerian Senate is considering a Bill to amend the Arbitration Act.  Five important changes are likely to occur if the Bill is passed into law. In no particular order, some of these changes are as follows:

1. How many arbitrators make a Tribunal?

Section 6 of the current Arbitration Act provides for a default composition of an arbitral tribunal. By this provision, where the parties fail to agree, a Tribunal will be composed of three arbitrators. In the proposed Bill, Section 6 provides that the default composition of a Tribunal will be a sole arbitrator. This change will potentially reduce costs.

2. What to do in an emergency

These provisions address the need for urgent interim measures in arbitration, typically required at a time when an arbitral tribunal has not been established. This had previously depended almost entirely on the intervention of the courts.

These provisions address the need for urgent interim measures in arbitration, typically required at a time when an arbitral tribunal has not been established. This had previously depended almost entirely on the intervention of the courts.

Section 34(4) of the proposed Bill provides that in computing the time within which an application to court for enforcement of an award may be made, the time between the commencement of arbitration and the delivery of the award is to be excluded.

The present position of the law is that, unless a Scott v Avery clause exists, time to enforce an arbitral award starts to run from the date the contractual cause of action itself arose, so that there is a risk that if the arbitral process is unduly protracted, the right to enforce the award may be statute barred by the time the arbitration is concluded and an award is delivered. The proposed new provision means that the statutory time-limit in relation to an action to enforce an arbitral award stops to run from the moment arbitration is commenced.

Until this proposed change is enacted into law, claimants in danger of an approaching limitation statute may need to file a “protective action” in court to preserve their rights to seek relief through the judicial system.

4. Setting aside an Award

Section 55 of the proposed Bill expressly excludes misconduct as a ground for setting aside an arbitral award. This is a positive change because under the current legislation, the concept of misconduct has been defined so broadly as to permit virtually full merit reviews of arbitral awards. The draft Bill employs various devices, including the introduction of an Award Review Tribunal to narrow the scope and expedite the timeframe for award reviews.

[1] Cited as the Arbitration and Conciliation Act, Cap A18, Laws of the Federation of Nigeria, 2004

Nigeria’s National Judicial Institute has issued a strong statement of judicial policy in support of arbitration. In a letter dated 26 May 2017 and written to all Heads of Court, the Chief Justice of the Federal Republic of Nigeria, the Hon. Justice W.S.N. Onnoghen, GCON, FNJI, who also chairs the Board of Governors of the National Judicial Institute, deprecated the practice where courts indulge parties who commence litigation in disputes arising from contracts with arbitration clauses. The Chief Justice emphasized the importance of arbitration in encouraging foreign investments, and counselled that arbitration “needs the support and encouragement of the judiciary”.