THE Lagos Court of Arbitration (LCA) has signed a Memorandum of Understanding (MoU) with the Lagos Chamber of Commerce International Arbitration Centre (LACIAC). 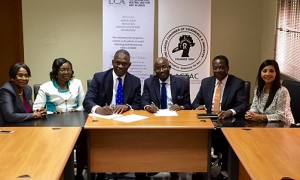 A statement by the President of the LCA, Olasupo Shasore (SAN) said, “It is an organic partnership as both organisations are committed to improving the business climate of Lagos. The goal of “The Arbitration in Lagos Project” is to promote Lagos as the centre of choice for the resolution of Africa related arbitrations, and to advance the infrastructure of alternative dispute resolution by concentrating the expertise and resource pool that we have readily available in the region.”

Tunde Fagbohunlu (SAN), Chairman of the Arbitration Committee, LACIAC spoke keenly about the “3 E” vision; “International and domestic arbitrations held in Lagos will be conducted efficiently, and with equitable procedures and outcomes.

“In the pipeline is engagement with the legislature and judiciary to ensure far reaching constitutional and legislative reform, and also to support efficient and expeditious enforcement of arbitral awards.

“We are very excited about the partnership, and are looking forward to the first “Arbitration in Lagos” event scheduled for April 16, 17, 2015 which will focus on showcasing the best of Lagos as an international destination for ADR, networking and relationship building. The event will be timed with the opening of the LCA’s newly minted custom-built ADR headquarters in Lekki.”

Though formed as a public sector initiative through the Lagos Court of Arbitration Law 2009, the LCA is, in fact, a private sector driven institution, independent of regulation, direction or control by any branch of government. The LCA currently has 200 professional members.

The LCCI is the second oldest and most active chamber of commerce in Africa, with over 2,000 members.

Sign up to receive latest news, updates, promotions, and special offers delivered directly to your inbox.
No, thanks